I got my arse kicked at work today. I’d made a mistake on a coagulation investigation I’d performed two days ago:

Apparently I should have added a thrombin time and a fibrinogen because….. pneumonia can (occasionally) cause D.I.C.
Personally I would have thought that the result of a fibrinogen assay (and consequently a thrombin time) on an ITU patient could be absolutely bloody anything because of the nature of ITU patients.
Fibrinogen may well be high because of the acute phase reactions, or my be low due to massive bleeds or liver disease (both common in ITU patients)
I must be missing something here…. 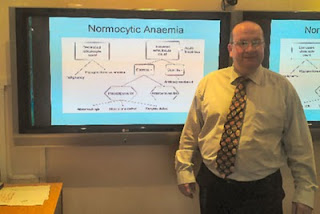 Our in-house CPD seminar program starts in a couple of weeks’ time. I usually start the program off with an introductory guide to exactly what a registrant has to do in the way of CPD.
I have a talk I've given in the past, but it's one which tends to go on and on. I spent a little time today pruning it back to cut out the (seemingly endless) repetition, and I've included a few examples of CPD that I've written up on this blog. It would be good to have included actual screen shots, but the I.T. available at work isn't capable of doing that. Which is a shame.
If any of my loyal readers are at a loose end on the lunchtime of Wednesday 7th September…
No comments: 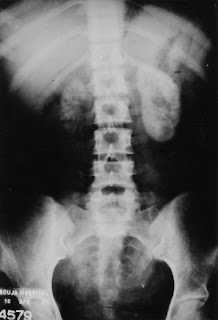 A new diagnosis – oxalosis. . Oxalosis occurs when the kidneys fail and stop eliminating calcium oxalate crystals from the body through the urine. Because the kidneys stop functioning, oxalate crystals are deposited elsewhere in the body such as the eyes and other major organs. In the latter stages of oxalosis, crystals may be deposited in the bones and joints causing painful bone disease.
I had a vague idea of the metabolism of kidney stones, but I had no idea stones could form all over the body.
No comments: 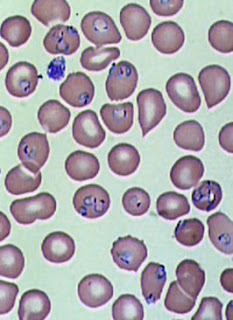 Today’s news was interesting. It would seem that climate change has had a noticeable effect on the distribution of the various species of mosquito that carry malaria. One such mosquito (which carries Plasmodium relictum) has now reached the U.K., and there are increasing reports of avian malaria in the U.K. wild bird population.
How long will it be until P. falciparum is endemic in the U.K. again?
(I’ve been saying this for years)
No comments: 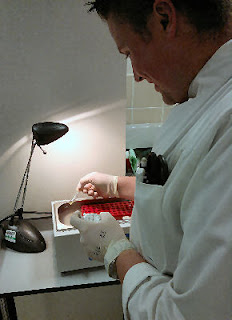 A manual INR was performed yesterday - it was "slightly" prolonged at 14.0. Another colleague repeated the test and found it to be "slightly" less prolonged at 8.0. That's quite a difference.
It transpired that the first test had been performed in plastic tubes whereas the repeat had been performed using a reagent which had been warmed in a glass tube: the glass having caused activation of the reagent. Because manual clotting is in many ways a thing of the past, the nature of the tubes wasn't seen as being of any relevance to the younger staff.
Old 'uns like me remember these things.
With the advent of more and more automation, there are all sorts of little wrinkles like this that will recede into the annals of history. Unremembered until such time as they cause problems.
No comments: 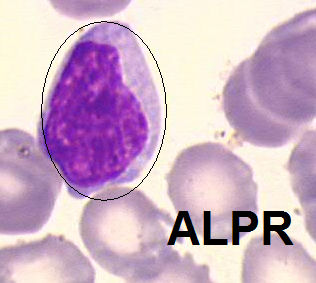 Another on-line morphology exercise. I thought it was going to be a rather severe case of glandular fever, and it was.
My diff wasn’t entirely in line with the sample answer, but bearing in mind the vagaries of what constitutes a “band form cell” or a “reactive” vs an “atypical” cell I think I did rather well.
Some of the questions in the exercise were a bit weird: what did they mean by “What sign of poor prognosis could be revealed?” But bearing in mind it had been translated from Italian I suppose it lost something in that translation.
Importantly its morphology work on which I got some feedback. Doesn’t happen very often….
No comments:

Last week I was wondering what a D.I. was. I know now. It’s a deviation index. Basically it’s a measure of how many standard deviations a result is from an expected target.
Which is far simpler than I thought it was going to be….

Email ThisBlogThis!Share to TwitterShare to FacebookShare to Pinterest
Labels: EQA

One of my trainees found this video on You-Tube. First of all I thought it was a brilliant idea: it could be submitted as evidence for all sorts of sections of either the pre-registration or the specialist portfolio. And then I actually watched the video.
Do my colleagues down the coast not wear rubber gloves?
Do they not fasten their laboratory coats?
Do they even have a clue what they are doing?
I feel that were this video actually offered to me as evidence for a portfolio assessment I would have to ask that last question when confronted with utterances such as “Donor blood is mixed with patient serum to determine blood group”. And I would have to ask what a “haemoglobin count” is.
I know I’m old-fashioned, but if I was going to be putting my laboratory on show to the world, I really would have tidied the place up first. If my analysers really had to be festooned with post-it notes and various scraps of paper, I would (at the very least) have made sure that they were new (and not dog-eared) post-it notes and various scraps of paper. Were there any white coats not in use I would have hung them up on a coat hook and not had them hanging off the back of a chair.
(And if one is going to wear a tie, one should do the thing up, and fasten one’s shirt collar)


To think I recently near-crucified a trainee for posting a photo he’d taken in the lab up on the internet: a photo which pales into insignificance against this lot…..

Here’s an interesting dilemma. One of my IQA blood count parameters (the top one pictured above) has a bias. The results are clearly within the range of acceptability, but they are not bouncing about the expected mean – they are ever so slightly low. About two per cent low, which in practical terms is utterly insignificant, but in real terms worries me – I want to be having results on the mean, not below, no matter how slightly below.
However the weekly EQA (the lower one pictured above) is absolutely spot-on.
Should I tweak up the calibration to fix the IQA, thus forcing the EQA to be high? Should I leave it alone (bearing in mind the deviation isn’t actually significant)?
What I actually did was to increase the calibration very slightly. The IQA is still slightly biased (but not as much), and I shall see what the EQA has done when it’s EQA day next week.
No comments: