An interesting case. Platelet clumping is a well recognised cause of falsely low platelet counts. It is usually an effect of the EDTA anticoagulant, and a genuine platelet count can be obtained by taking the blood sample into a different anticoagulant.
This patient had clumped platelets evident in the blood film regardless of the anticoagulant used.

Some time ago I acquired a USB camera which has proved very useful for training purposes. Last week I mentioned it to a colleague based in our sister hospital, and he has now acquired one such camera for his department.
As fate would have it, the day the camera arrived, so did a new case of A.L.L.; photographs of which were taken and used as training aides.
No comments:


Doesn’t this just sum up all that is wrong in the relationship between laboratories and wards. And for all that the ward staff aren’t perfect (who is?), the sooner we lab staff realise we aren’t the centre of the universe, the better… 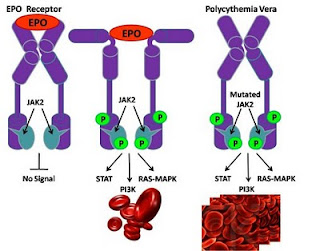 Here’s a thought… There is an awful lot of overlap in various clinical and morphological features seen in myeloproliferative disorders. And for some time JAK-2 mutation screening has been becoming more and more of a popular test in the diagnosis, even though it’s not diagnostic. (About 50% of essential thrombocythaemia patients test positive for the JAK2 mutation whereas about 97% of polycythemia rubra vera patients). 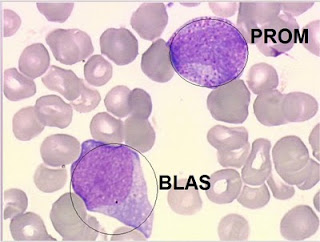 Another on-line morphology exercise. A man aged 59, was referred by his family physician for a haematology consultation for investigation of weakness and leukocytosis. The patient had an unremarkable past medical history. He was a former policeman, now retired. He had led a normal life, remaining physically active and practicing sports on a weekly basis. A couple of weeks previously he began developing progressive weakness. Physical examination showed an enlarged spleen, 6 cm from the costal margin. Besides the blood count, other tests carried out including renal and liver function which were normal; only C-reactive protein (211 mg/L) and lactate dehydrogenase (980 IU/L) showed elevated levels.

The on-line blood film showed neutrophilic leukocytosis and the presence of granulocyte precursors, eosinophilia and marked basophilia (20.0%).
Occasional micromegacaryocytes were present with their striking features of evenly distributed cytoplasmic blebs. My differential wasn’t as spot-on as it might be, with me and the expert disagreeing on pre-myelocytes and blast cells. But in many ways, that’s me being picky.

Whilst a slight increase in the number of basophils may be associated with various diseases, marked basophilia is usually associated with myeloid neoplasms, including myeloproliferative neoplasms (MPN), acute leukaemia and myelodysplastic syndromes (MDS).

Basophilia together with neutrophilic leukocytosis and the presence of neutrophil precursors immediately pointed to chronic myeloid leukaemia. I gave that as my answer – I was right. 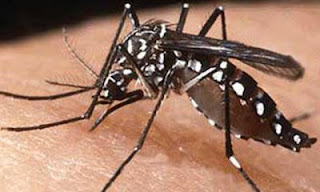 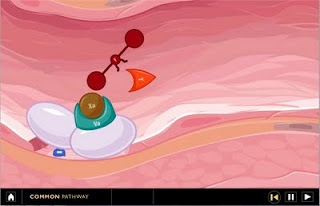 Here’s an interesting video about how the coagulation cascade works. The animations rather bring the thing to life.
I was under the impression that science was rather going off of the idea of the traditional clotting cascade in favour of “something else”, but I suppose until such time as this other theory is actually expounded, the traditional clotting cascade is as good a theory as any…. 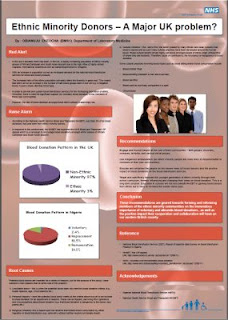 “It is becoming difficult for the NHSBT to provide blood for the ever growing ethnic minority population in the UK. This is due to the low rate of blood donation in these communities, which is inadequate to support the provision of rare blood groups found specifically among such groups especially from African/Caribbean and south Asian origins e.g. U negative blood usually found only amongst people of African/Caribbean descent.
Furthermore, conditions such as Sickle Cell Anaemia and Thalassemia Major require regular blood transfusions and are more prevalent in these communities.
In response to this predicament the NHSBT has launched the NHSBT VIP Appeal which is a campaign to encourage people of ethnic minorities to become blood donors.
This study looks into some of the root causes of the problem by comparing the rate of blood donation in ethnic minority communities in the UK with the rate of voluntary blood donation in Nigeria.
According to the NHSBT, less than 3% of all blood donations last year were from ethnic minority donors. This correlates with the 2.4% voluntary blood donation rate recorded over the course of a year in Nigeria.
The study enumerates some of the cultural practices, patterns and beliefs that form and inform the attitudes of people towards blood donation both home and abroad. In conclusion, some recommendations are put forward that could help confront, correct and hopefully eradicate this deep-seated problem within our modern British society”.
1 comment: 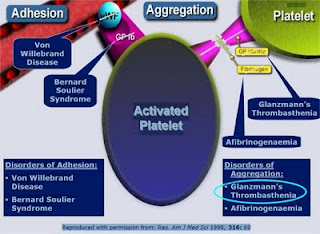 Glanzmann's thrombasthenia is an abnormality of the platelets. It is an extremely rare autosomal recessive coagulopathy in which the platelets lack glycoprotein IIb/IIIa.
Hence, no fibrinogen bridging can occur, and bleeding time is significantly prolonged.
There is a normal platelet count and morphology, and normal (but possibly reversible) platelet agglutination by ristocetin and VWF. However there is absent or severely diminished platelet aggregation in response to natural agonists - ADP, collagen, thrombin, & epinephrine, and absent or diminished clot retraction in most patients
However these days flow cytometry using monoclonal antibodies to GPIIb- IIIa is the current method of choice for diagnostic confirmation. Times have changed…..
No comments: