I get my CPD material from a range of sources. I read up and do things and get emails and see things on Facebook and make a note of what I’ve done, and periodically I st down and have a little session when I write it all up.
I had one of those sessions today. When I sparked up my lap-top I had sixty-six potential “things” to write up from the last three weeks. I only bothered with sixteen of them. Fifty potential CPD activities weren’t worth mentioning. That’s a *lot* that didn’t make the grade. They included:

I spent (wasted) quite a bit of time this evening weeding out the activities from which I didn’t actually get any benefit whatsoever.
I *really* need to be a bit more focussed in my CPD-ing. 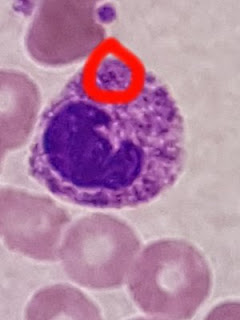 Is this a Dohle body?

The patient is neutropenic and septic…. It would fit…