A patient presented just before midnight with low Hb and with a GI bleed. Male, in his seventies, and with no transfusion history. Units of blood were requested…

As there was no history I insisted on having two blood samples taken at different times. Cell groups presented as A Rh(D); however the reverse groups presented as O. Agglutination was seen in both A and B cells. Antibody screens in both samples were negative.
My immediate reaction was that this was a case of A2 with an anti A1. However with no anti A1 available I was unable to confirm this. But this theory went out the window when two of the four units of blood I crossmatched were clearly incompatible.

I did photograph the antibody panel; I wish I knew what I did with the picture. But suffice it to say the results were incredibly inconclusive. By now it was 3am and I was just a little bit worried.
I had another look at the antibody panel and realised something. Reactions had occurred in cells that were all homozygous for the M antigen. Anti-M would explain what was going on. But lacking any anti-M reagent I was unable to confirm the M-status of the supposedly compatible units. They could well have been heterozygous and test compatible but could cause a reaction.

I spoke to the doctors and explained the situation. I had two units which might be compatible, but I couldn’t be sure.
The patient was stable, and we arranged for further samples to be taken to be sent to the reference lab, and for M-negative units to be supplied from the NBS.

Now (a few days later) I’m told I did the right thing(s). But I can’t help but wonder where the anti-M came from… and what would I have done if they had insisted on transfusing him? 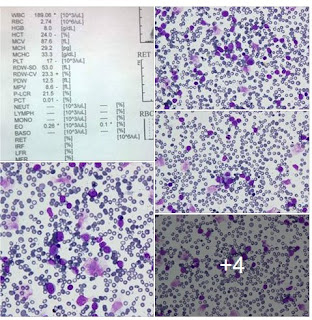 This piccie appears on the Facebook Hematology interest group today… Educationally what good is it.? The picture is presented with the comment “Please drop your opinions freely” and reading the various opinions on this page I’m beginning to wonder if the key posters to this group can recognise that something is abnormal, but have absolutely no idea why.
The group could really do with posting follow-ups to these cases…


The American Society of Hematology emailed me their newsletter today: