An example of an ongoing problem….. Look at the second set of results from the left.
Blood samples are collected using needle and syringe and having taken the blood, the syringe was left to stand before filling the blood bottles. We know this because the venesectionist who took the blood admitted doing so – they got distracted for a few minutes.
In the time the syringe was left standing, the blood settled remarkably fast, and the blood count bottle was filled last. Clearly the results are rubbish, as evidenced by the “normal” repeat sample.
This cause of spurious results should be borne in mind to avoid unnecessary and unwanted blood transfusions.
No comments: 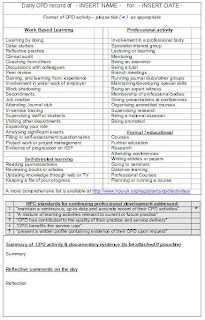 I’ve been recording my CPD on line for some months now. However there are still many people who prefer to record these things on paper. Many years ago I devised a template for doing exactly this.
Despite our living in a very on-line world, I still get asked for this paper template a lot. The template is available here, for anyone who might like to record CPD in this format.
No comments: 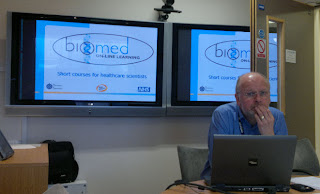 Today’s talk was on the distance-based learning offered by the . They offer modules on a range of topics including lung disease, renal disease, blood transfusion, quality issues, near patient testing…..
They also offer a scheme whereby if you complete four modules and a practical or theoretical project in the workplace within six years, then they’ll give you an MSc degree for it. Bearing in mind each module takes three months, obtaining an MSc suddenly becomes a much less painful proposition, both in terms of spreading out the academic effort, and in spreading out the cost.
I’m quite tempted to go for it myself, if it wasn’t for the fact that I can’t really make a case for my needing an MSc degree (and so getting work to pay for it) and the courses aren’t cheap…
No comments: 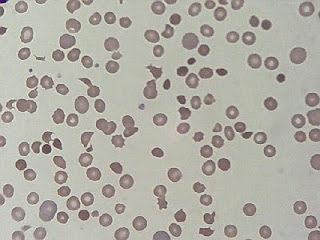 Haemolytic-uraemic syndrome (HUS) is a disease characterized by hemolytic anemia, acute renal failure causing uremia and thrombocytopenia. Predominantly (but not exclusively) affecting children; most cases are preceded by an episode of diarrhea caused by E. coli O157:H7 acquired as a foodborne illness.
It carries a 5–10% mortality; of the remainder, the majority recover without major consequences but a small proportion develop chronic kidney disease and become reliant on renal replacement therapies
This case is a good example of the condition – note the anaemia and thrombocytopenia. The bldd film shows fragmented cells, poikilocytes and spherocytes
No comments: 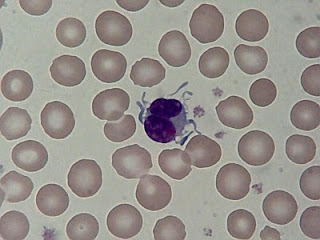 On Friday I posted a picture of a strange cell and asked for suggestions as to what it might be. I also mentioned about this blog entry on a pathology mailing list to which I subscribe. I cannot believe the response I have had, Normally this blog receives about dozen visits a day. On Friday it got thirty visits, on Saturday it got two hundred and seventy seven visits, on Sunday it got seventy three visits, and there have been one hundred and nine visits today (so far).
Furthermore the picture has been reposted on another blog and people have posted comments there too. In total I have received over thirty responses as to what the cell might be.
I don’t want to be dismissive of anyone’s suggestions, but some of the comments I’ve received aren’t very likely. Whilst the cell is definitely a white cell of some sort, it is certainly not an eosinophil or a basophil.
The most likely suggestions include:
There was only the one cell like it – we couldn’t find any others. A lot of people gave the sage advice that if there’s only one oddity then it can be ignored. Which is what we’ve actually done in practice.
But it would have been nice to have known what the thing was….
1 comment:

This cell was found in the blood film of one of our patients. As is so often the case clinical details were somewhat lacking (it is enough that the doctor wants a blood count!!!).
The cell is unique in that I could find no others on the blood film, and I’ve never seen anything like it before. Might I ask my loyal readers if they have any ideas as to what it might be…
12 comments:

On December 7 last year I mentioned that I had some malaria training. I say “training” – I had a look over an on-line atlas which features pictures which are probably computer enhanced. I then was set four slides to examine. I mentioned at the time that the slides weren’t particularly well stained, but was told to get on with them.
In retrospect I really could have done with having feedback at the time. Waiting for six weeks means that I have forgotten all about what I saw. In any event I’m told I didn’t do too well. I was given four sides to look at, none of which were of any particular quality – all were very blurred.


At the time I wrote “I can’t help but feel that if I can spot the fact that a patient has malaria, then that is good enough. Other people far more expert than I can identify the species and quantitate the parasitaemia.”
Enough sulking – what can I do too improve? I need training – and that isn’t immediately forthcoming. I’ve asked for a day’s secondment to the London School of Tropical Medicine. I wonder if I’ll get it.
1 comment: 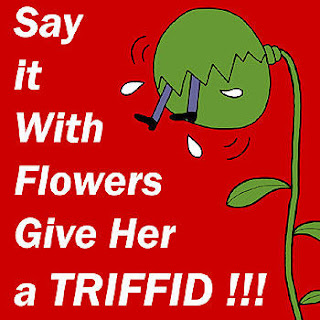 A fascinating talk today. A chap came in to A&E having overdosed on drugs. Not an uncommon event. But this chap had OD-ed on plant food!
I’m reliably informed it’s like amphetamines. One lives and learns…
(as always, the presentation is available in the archive)
No comments: 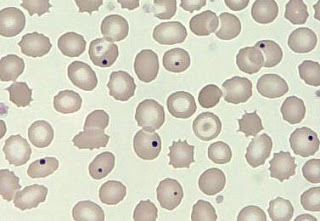 Named for William Henry Howell and Justin Marie Jolly, Howell-Jolly bodies are basophilic nuclear remnants in circulating erythrocytes. They appear as a black spot on the otherwise eosinophilic (pink) erythrocyte on a standard stained blood smear. These inclusions are normally pitted out by the spleen during erythrocyte circulation, but will persist in individuals with functional hyposplenia or asplenia.
Common causes of asplenia are splenectomy following trauma to the spleen, and autosplenectomy caused by sickle cell anemia or related conditions.
Up to ten percent of patients with coeliac diseases also present with splenic atrophy with subsequent Howell-Jolly bodies. Other causes are radiation therapies which damage the spleen.
Howell-Jolly bodies are also seen in severe hemolytic anemias, megaloblastic anemia, hereditary spherocytosis (occassionally), and myelodysplastic syndromes.
No comments:

If a member of the public has a complaint about a health care professional then there is a very open process by which allegations of unprofessionalism, incompetence and malpractice are followed up. It’s laid out by the HPC, as are the results of their investigations. Such investigations are a matter of public record. Periodically I go through the archives. Some make macabre reading, some are downright criminal. And this one amazed me – a psychologist who told his patient that she was both psychic and a witch.
I spend a lot of time telling family, friends and the public at large how wonderful the NHS is (and it is!), and then I find myself undermined by this sort of thing…
No comments: 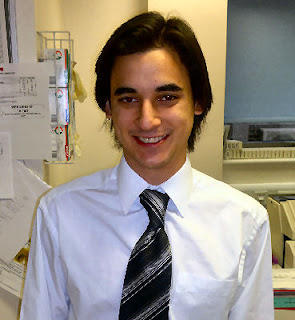 As an assessor myself I enjoy assessing other trainees. I like visiting other hospitals. I feel I get a lot from the experience; I learn a lot, and (hopefully) at the end of my visit everyone is smiling after a successful assessment. (I failed one once, but that’s another story…). However when I have an assessor in to see one of my trainees I am worried sick. I hate it!
The point of the assessment was to examine the trainee’s pre registration portfolio and to see if he had met all the criteria. I’ve actually gone to the trouble to produce a website all about this pre registration portfolio. Ideally someone else would have done this already, but the formal advice we receive about this is minimal. The idea is that the advice should be minimal to encourage the trainees to be artistic and creative in compiling their portfolio. No two portfolios should be the same; each should show the individual compiler’s input.
Some assessors (like me, I hope) have taken this philosophy on board. Others (to be fair it is a small minority) come along with a fixed view of right and wrong; their way being right and everyone else’s being wrong. I have encountered such narrow minded assessors in the past, and had to fiercely argue my trainee’s worth.
In one such case I challenged the assessor to explain why she felt certain work was not up to the required standard. Her answer was “I don’t like it!”, snarled in a rather arrogant fashion. She eventually admitted defeat very gracelessly. Another assessor once criticised one of my student’s work for having both too much and too little health and safety input. And then went on to refuse to see any contradiction.
As part of the assessment process the assessor interviewed me, and asked if I had any difficulties in mentoring. I told her that I hated the variability between assessors. She laughed, and related her experiences. She’d had dealings with a chap who would only accept work from a student in a question-and-answer format. Essays, case studies, reflections were all worthless to him. I liked today’s assessor. She (like me I hope) knew what she was doing. My chap passed his assessment. That’s now nineteen trainees I’ve overseen to qualification.
No comments: 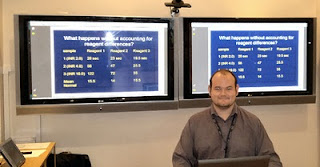 Today’s talk was due to be on hereditary spherocytosis, but with only three days to go, or planned speaker realised that he was on a night shift today. Woops!
Fortunately a volunteer stepped into the breach. Having recently received a CD of talks given at a conference he recently attended, Dan presented on the topic of variability in the measurement of INRs.
There were flashbacks of a talk given a few weeks ago – who actually prepares normal ranges these days? (Rather than look them up in a book). And an interesting discussion on . Surely they need to be device specific, rather than one ISI for all the devices in one clinic?
1 comment:

Rather American rather than UK-based, but it brings home what the job is all about…
No comments:

Today’s lunchtime seminar was on the detection of auto-antibodies. I won’t attempt to blag it; I slept through the entire seminar.
Mind you, the session wasn’t entirely wasted on me: as the organiser I shall make sure the window is open for future sessions.
No comments: