I had an email from the BTLP-TACT people today. I was a tad miffed to read “… you may need to complete further TACT participations to improve your engagement target with the system” when I’m told by all of my colleagues that I do far more exercises than they do, and that they don’t get these reminders.
The last time I did one was two weeks and one day ago. How often am I supposed to do these? But it is good CPD, and it is free…
I was presented with one case; a twenty-two year-old woman needing two units of irradiated blood within the next two hours. She typed as O Pos with a negative antibody screen. I selected two units of O Pos irradiated blood (both of which were K-negative)… and got the green light.
No comments: 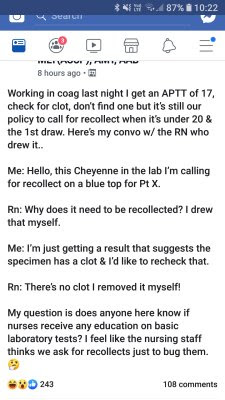 But this made me reflect - What we do is only ever as good as the samples with which we are presented…
No comments:

The nice people at the Transfusion Evidence Alert sent their update today. One or two useful snippets:

At the weekend I had an interesting case. Two samples from the same patient which the analyser grouped both as “A”, but with an indeterminate Rh group. I performed the groups (both long groups and check groups) and made both A Rh(D) Negative. But I looked closely at the analyser plots. Was there something in there?
The standard operating procedure says that the anti-D reagent should be used macroscopically, but under the microscope was some very small agglutinates.

Reference to SPI-CE came up with the patient who had been tested from another hospital. They were known to have a weak Rh(D). A *very* weak Rh(D).

Now… had there been analyser failure and had I been working using manual techniques I would have called this patient Rh(D) negative. For a transfusion point of view this would have been fail-safe as I would have transfused Rh(D) negative blood. However if this had been an ante-natal patient I might have issued anti-D.
I’ve been fretting about this…

There’s more on weak D and D variants that you can read by clicking here…
No comments: