The IBMS newsletter arrived in my in-box this morning. Some months the thing has all sorts of snippets of useful information. This wasn’t one of those months. I must admit I was a tad disappointed. There was talk of the upcoming IBMS congress. I’ve never been to one; and would rather not go to one. There was brief mention of National Women’s Day and Healthcare Science Week, and some upcoming events that weren’t really relevant to me and were a long way from me in any case.
Time was that the IBMS use to organise local events on a monthly basis…
No comments: 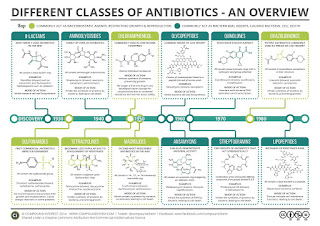 I’ve always been a bit vague about antibiotics. Suffice it to say that some of them kill some bugs and some kill others, and the clever bit is working out which will do for a specific patient’s particular infection.
This article explains antibiotics rather well… 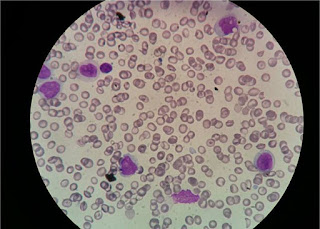 This picture appeared in the Facebook “Hematology Interest Group” today. The cation was “identify the cells”.
Clearly the white cells are monocytoid; I would say monoblasts. However the red cells don’t look right; hypochromic with anisocytosis, and is there thrombocytopenia?

A few days later (I like being able to blog this retrospectively) some clinical information was given:
“A one year infant presented with hyperleukocytosis (120k) ,thrombocytopenia , anemia, arthritis HSM. Morphological diagnosis AML-M5b , most of the cells present were promonocytes that accounted as blast equivalents.”
Rather a horrible thing in a one year old…