The Transfusion News email came today. My last two posts were grumbles. This one - not so. Ironically the works IT people have blocked the web domain used by the nice people at Transfusion News…

The IBMS newsletter came today. Yesterday I was whinging about how I’ve signed up to so many mailing lists and how few of them are of any actual use to me.

I’m not going to run down my own professional body, but perhaps their missives might be more useful if they had a few less generic ones, and a few more discipline-specific ones.

“The Oncologist” newsletter appeared in my inbox today. I won’t lie. I perused it briefly and then pressed the “delete” button. The thing is useful... but is really only of peripheral interest. None of the articles caught my eye.

This newsletter isn’t alone. I’ve signed up to a *lot* of mailing lists which aren’t really much use to me. The “bioanalysis zone” is one such, as is the regular update from NHS England and loads of others. They keep me vaguely of general health-related  matters but I can’t help but wonder just how much benefit I get from them. Would the time I spend deciding not to bother with each of these snippets be better spent concentrating on stuff which *is* useful?

Perhaps I need to revisit exactly just what I’ve signed up to?

I looked at the December NEQAS films on 12 December... the information given was rather lacking as it usually is.

The results came back on today - I did good. 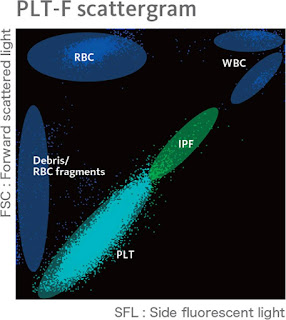 There was a lot of “blah blah” on the original post on Facebook. Science can often be dry “blah blah”. No one picked up on the fact tha this is about an algorithm based on the very numbers our analysers churn out every day in thousands. Would it take much effort to run this algorithm with every blood count? After all this is why we do screening, isn’t it? 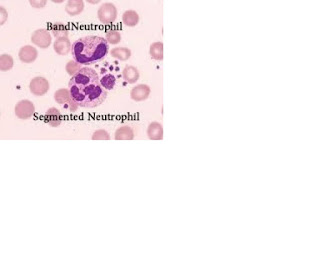 An interesting post Medical Laboratory Science group over on Facebook: “So I got written up recently for over calling bands because the NICU uses the IT ratio to determine if the babies need continued antibiotic treatment. Apparently the top one here would actually be considered a seg, according to my hospital. I don't recall learning this in school. Do you guys?”

“Band” neutrophils as opposed to “segmented” neutrophils… ? Both are American terms, aren’t they? The subsequent discussion was interesting. Over here in the UK we’d never mess about trying to differentiate between segmented and band forms. We’d just report “left shift” and leave it at that.
Wouldn’t we…?

Some of my sources of CPD are rather useful. Some are frankly rubbish. The Lablogtory blog is something of a curate’s egg… good in parts. But there is always *something* to be had from even the (seemingly) most irrelevant rubbish.
Take this most recent offering from Lablogatory talking about recycling. How long is it feasible to struggle on with equipment which is frankly knackered.

I can remember two old analysers which were well past their best. I would spend at least half my working day (every day) coaxing them to work. Having analysers which work is such a delight these days…

Email ThisBlogThis!Share to TwitterShare to FacebookShare to Pinterest
Labels: lablogatory

Whilst looking at blood films I saw a neutrophil drumstick. I knew what they were... once. So I looked it up and started quite a little voyage of discovery. 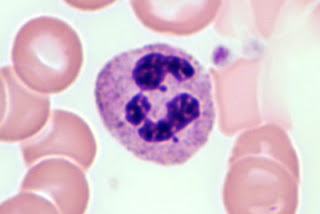 The Internet told me that a neutrophil drumstick is a nuclear lobule attached by a slender strand to the nucleus of some polymorphonuclear leukocytes of normal females but not of normal males. They contain  the Barr body. Barr body...?
"a small, densely staining structure in the cell nuclei of females, consisting of a condensed, inactive X chromosome. It is regarded as diagnostic of genetic femaleness"
But that just raised more questions.
Inactive X chromosome... Why is any chromosome inactive, X or otherwise. It turns out that if one of the X chromosomes isn't inactivated in females they will have twice as many X chromosome gene products as males, who only possess a single copy of the X chromosome. Obvious really when you think about it.
Apparently the choice of which X chromosome will be inactivated is random in humans and all placental mammals (but not in marsupials… but I digress), but once an X chromosome is inactivated it will remain inactive throughout the lifetime of the cell and its descendants in the organism.

This suggests why you can see, that there are two red cell populations of erythrocytes: deficient cells and normal cells  in the blood of women heterozygous for Glucose-6-phosphate dehydrogenase (G6PD) deficiency, depending on whether the inactivated X chromosome (in the nucleus of the red cell's precursor cell) contains the normal or defective G6PD allele.

However, sometimes the X-inactivation isn't entirely random. It can be skewed toward the paternal or maternal X chromosome
This explains why although X-linked, approximately one third of patients with congenital sideroblastic anaemia  are women due to skewed X-inactivation

One lives and learns...

I did a BTLP TACT exercise whilst things were quiet. There was a male patient who was A Positive with positive reaction in screen cells 2 and 3.

I requested IAT and enzyme panels which were both positive in all cells but 1 &2. This corresponds with anti-c but doesn’t allow me to exclude anti-E or anti-Lu(a).

Interestingly the expected result was that anti-E couldn’t be excluded, but there was no mention about anti-Lu(a) being non-excludable.  However I got the green light, which was the main thing​

What blood are you issuing?"

The subsequent discussion was interesting. Clearly we have a patient who is A Rh(D) Negative with anti-c. Obviously you give them blood which is both D-Neg and c-Neg…
In theory.
In practice r’r’ is only about 0.01% of the population…

Given two hours I would throw it at NHSBT and the consultant… and hope no blood is needed.