As a lad I can remember getting a copy of the Guinness Book of Records one Christmas. It told me the rarest blood group in the world was "Bombay Blood". At the time only thee people in the world were known to have that blood type (according to that year's Guinness Book of Records).
I can remember on my first day working in a blood bank (in February 1982) in an impromptu tuorial being told that I would never ever in my working career either encounter an example of "Bombay Blood", or meet any other biomedical scientist (or medical laboratory scientific oficer as we were known then) who had.

Today whilst working alone on the late shift I had a patient with a positive antibody screen. The confirmatory panel was positive (4+) in all cells in both IAT and enzyme techniques. There was a historical report on file:

"Bombay Blood" - as rare as rocking horse poo. But I've now seen it. 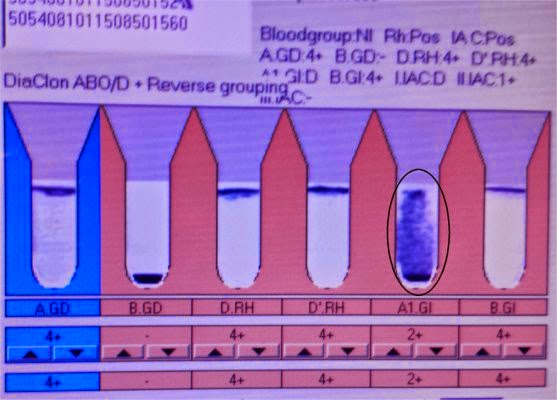 Another strange result when performing a blood group. Supposedly A Pos; what's happening with the A cells?
... anti-M - an antibody which works at room temperature. There's far more to blood groups than just sticking the samples on an analyser...

The latest "HPC in Focus" magazine came out via email today. It seems there's to be a revision to the Standards of Practice for biomedical scientists like me.
The new stadards can be seen here.

I can't help but feel that whilst there is a serious need to document exactly what is expected from a healthcare professional; it's perhaps not such a sensible idea to try to have a "one size fits all" approach with the standards. A healthcare professional who has face to face contact with patients constantly (such as a chiropodist or a physiotherapist) will have different expectations and requirements to someone who does not (such as a pharmacist or me!!)
Take for example the new standard #5 "be aware of the impact of culture, equality and diversity on practice". Someone who has face to face contact with people must be far more aware of the diversity of their patients than I am because they actually see that they are a diverse bunch... to give but one example.

A discrepant blood group. Historically known to be blood group AB Pos, today we had dual populations in anti-A, anti-B and both anti-D. It transpired that the patient had received a blood transfusion of O Neg blood yesterday.