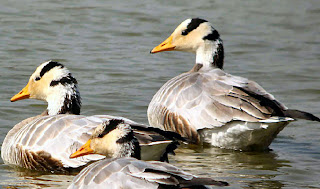 I suppose it is only logical that they would do – the mechanics and logistics of protein production are much the same for geese as they are for humans.
Bar headed geese fly over the Himalayas as they migrate. There’s not much oxygen at those altitudes, and so consequently a haemoglobinopathy has arisen: a high-affinity haemoglobin. Hb Olympia, Hb Heathrow and a hundred other high affinity variants are known in humans. It’s only logical that animals in low oxygen environments would have them too…..
I can’t help but wonder if malaria has given rise to variant haemoglobins in the animal kingdom like it has in humans (sickle cell disease and the like…)