Whilst unpacking some ESR pipettes I discovered a strange plastic object. I wondered what it was, but noticed that on the sides it was marked with angles of 45o and 60o. It’s a rack for doing ESRs at strange angles. I always thought they should be vertical. 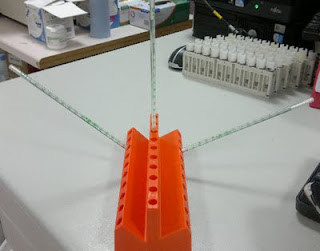 Here's an interesting article http://www.nrcresearchpress.com/doi/abs/10.1139/y73-104?journalCode=cjpp
As a trainee I remember my chief at the time telling me that he'd heard that by angling a tube at 45o, one could obtain the result of an hour's ESR in ten minutes. However he did give the proviso tat the relationship only held in health, in disease states this was not always the case.
We've been looking at running automated ESRs for thirty minutes rather than an hour lately, but have found poor correlation between results over thirty minutes and an hour. Highs are still high, and normals are still normals, but there would seem to be very different ranges. Which is what one would expect from what are effectively different tests.
Personally if we are going to change method I'd forget about thirty minute ESRs and go straight for ten minute ones. Both will necessitate a change in the reference range, but one is much quicker. I wonder if 10 minute ones can be automated.....?