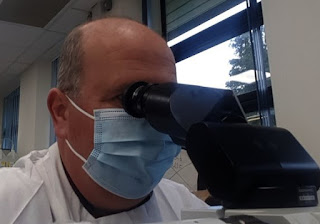 I got the results of the morphology NEQAS today…

The film showed lymphocytosis with many smear cells
There was some poikilocytosis with crenated cells
The platelet count looked normal, but there were some clumps present

I was presented with a blood film ostensibly from a 67-year-old male with Hb 137 and Wbc 6.9