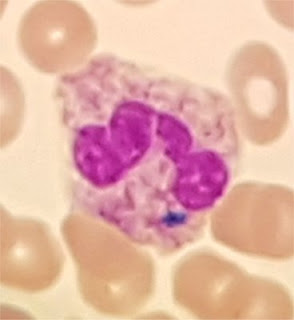 Look what I saw today… These were all the rage in work-related Facebook groups a year or so ago. Originally billed as “Green Crystals of Death”, these blue-green crystals are seen in the neutrophils of critically ill patients. I must admit I’ve been hunting for them ever since I first heard of them, and so far I’ve seen one. Only one. This one.

They are now known as “Critical Green Inclusion Bodies” (even though they look blue to me!). there’s a good primer about the things on Wikipedia, but I have a question. Bearing in mind that neutrophils have been studied for over a hundred years since Elie Metchnikoff first described them, why have these critical green inclusion bodies only been seen in the last few years?

Email ThisBlogThis!Share to TwitterShare to FacebookShare to Pinterest
Labels: down my microscope, reflection