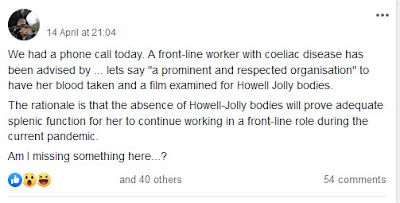 We had a phone call yesterday. A front-line worker with coeliac disease has been advised by ... lets say "a prominent and respected organisation" to have her blood taken and a film examined for Howell Jolly bodies.
The rationale is that the absence of Howell-Jolly bodies will prove adequate splenic function for her to continue working in a front-line role during the current COVID-19 pandemic.
This seemed a rather strange request to me and all of my colleagues. I mentioned it to one of the consultants who laughed and said that it was complete nonsense… but just wait – in five years it will be standard practice. (He’s probably got a point).

I thought I might ask the wider blood-testing community their opinion so I posted on the Facebook Hematology Interest Group.
The responses came into three broad categories.


There were several references to articles posted from people in the third category amazingly ten per cent of people with coeliac disease also have reduced splenic function. Perhaps we *will* be looking for Howell-Jolly bodies more often?