A couple of days ago I checked my e-learning. My fire safety e-learning was out of date, but that was all. Suddenly I had an email telling me that our separate bits of e-learning had lapsed. I would have thought that the software might have given me some notice?

So in between other stuff on the night shift I did some e-learning.

A refresher is always good…

Despite it only being a week since I last did a BTLP-TACT exercise I had an email from the boss telling me to do another.
So I did.

The software presented me with two cases:

22775 – a sixty-nine year old man from the haemophilia clinic requiring group and save.
He grouped as uninterpretable ABO group but was Rh(D) Negative with positive antibody screen in cell 1.
I requested antibody panels. The IAT and enzyme panels were positive in cells 1, 2 and 4 which was indicative of anti-C but did not exclude anti-Cw.

The Fritsma Factor newsletter appeared in my in-box today. All useful stuff for keeping me up-to-date with what’s going on in the world of haemostasis.

The nice people at Transfusion News sent me quite a lot to think about today. As I said yesterday about something else, pretty much all COVID-19 related, but I’m not complaining. It is good of them to do what they do for me, and all for free…

The nice people at the Transfusion Evidence Alert sent me quite a lot to think about today. Pretty much all COVID-19 related, but I’m not complaining. It is good of them to do what they do for me, and all for free… 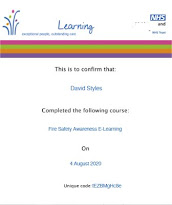 I did my fire safety e-learning today. Whilst I appreciate the necessity of it, I honestly don’t see how it counts as CPD. But I am reliably assured that it does… so I mention it…

Bearing in mind that what with one thing and another I’d not done a BTLP-TACT exercise for nearly a month I thought I’d better get busy.
Despite an incredibly slow PC, the software presented me with two cases:

42890 – an eighty year old chap going for cholecystectomy requiring Group & Save. But having an inadequately labelled blood sample (no NHS number) I rejected that one.

83689 - a fifty year old chap requiring Group & Save as a prerequisite for a bladder tumour resection.
He typed as O Rh(D) Pos with a negative antibody screen

I got the green light. I would have gone on and done more, but what with the PC running so slowly I decided to quit whilst I was ahead.