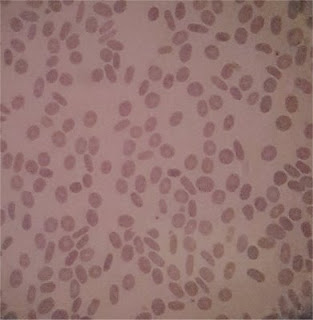 Here’s an interesting case. One I personally found whilst at work today. Apologies for the awful photo – I took it with the phone on my camera.

The patient had been in hospital for a while. However today his neutrophil count had dropped below the level at which we would scrutinise a blood film.
Look – elliptocytes !!

On seriously reviewing the case it seemed that elliptocytes had been seen eighteen years ago. Again a chance finding like most cases of elliptocytosis, and in no way clinically significant.
But I got so excited with the elliptocytes I nearly forgot to review the neutropenia.

There’s a moral in there somewhere…