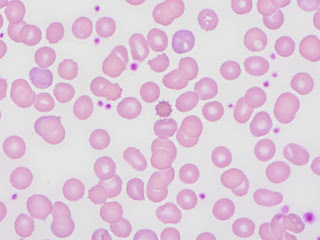 One of our consultants has started doing a “Case of the Week” for which I am very grateful.

“This week's blood film shows small contacted red cells with spikey projections. We used to call these 'Sputnik' cells after the first Russian satellite launched in 1957. Actually, looking at Sputnik, they don't really look like that as the spikes are all over the red cell, not just on one side. 'Prickle cells' may be a better term
This is a blood film from a patient with pyruvate kinase deficiency.
This is an autosomal recessive condition and is the commonest inherited disorder of the glycolytic (or Embden Meyerhof) pathway in the red cell that converts glucose to pyruvate / lactate.
PK is enzyme that converts phosphoenolpyruvate to pyruvate with the production of ATP.
Deficiency causes a haemolytic anemia which varies considerably in its clinical presentation from hydrops to neonatal jaundice to haemolysis presenting in childhood.
This is because there are over 200 mutations that have been found in the PKLR (liver and red cell) gene on chromosome 1.
Interestingly, PK deficiency causes an accumulation of products upstream in the pathway including 2, 3 DPG. This shifts the oxygen dissociation curve to the right, resulting in increased delivery of oxygen to the tissues. Consequently, although patients are anaemic, they often tolerate it reasonably well.
Treatment is mostly supportive with red cell transfusions if required. Occasional patients with severe disease have been cured with an allogeneic stem cell transplant”