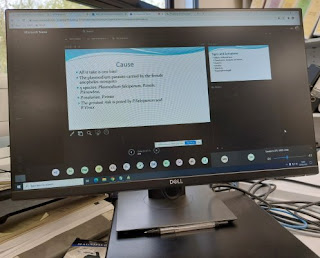 One of the trainees gave a talk about a case she’d recently encountered; a chap turning up in A&E with fever who turned out to have malaria… despite not having been anywhere malarious for over a year. Had he been having fevers tat weren’t bad enough to warrant a trip to hospital, of had the malaria encysted somewhere?

It was a good case study which was presented well via Microsoft Teams… mind you I do feel for the trainees who give these presentations. The subsequent discussions can so easily be taken over by the more experienced colleagues and the trainees can be left looking rather out of their depth. I deliberately kept quiet so as not to do this to someone who had obviously put in a lot of effort.

Mind you the show was nearly marred by some managerial type’s insistence that everyone listening in to the presentation should formally introduce themselves to everyone else. Fortunately no one took any notice of this (despite it being vigorously pushed)… but looking back on the talk all I can remember was this woman’s banging on that everyone should say who they were even though the display screens had a list of participants, and a right click called up all the information you would ever need…
What is it with this need to have everyone introduce themselves anyway? Most people would rather not do so, and it achieves nothing but waste time.
Is this some new etiquette of our post-COVID age?