Here’s an interesting case. A patient with no previous history presented with a low platelet count at Sunday in the early afternoon.


There were no clots on the sample, so I looked at a blood film. There were platelets present, but those that were there were bunched around the neutrophils. 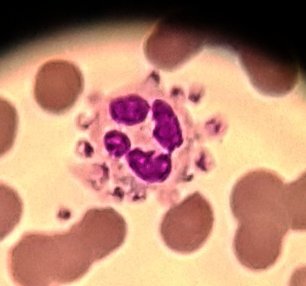 Platelet satellitism isn’t common. But I was surprised to see that according to the American Society of Hematology there have only been forty-four reported cases (up to ten years ago). I can only think that this means that no one bothers writing it up. It’s not common, but it is by no means as obscure as other conditions. I’ve seen it before myself.

There are articles on the subject here and here. There are a few theories about how and why the clumping of platelets around the neutrophils occurs, but the bottom line is that it is an in-vitro occurrence causing a spuriously low platelet count. The falsely low result should not be reported.